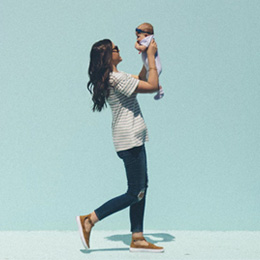 Surrogacy is an assisted reproductive technology that involves three people in the conception and birth of a child:

After the birth of a child, genetic parents are registered as lawful parents. In most cases, surrogacy is used to combat infertility among the couples in case the woman is not able to carry a child for medical reasons.

Surrogacy is possible only with In vitro fertilization performed in gynecological clinics of the corresponding profile: an egg fertilized in vitro is transferred to the uterus of the surrogate mother during the first 3-5 days of the embryo development.

Fertilization of the gamete (egg) is performed outside the woman’s body and then created embryos are transferred into her uterus. IVF is carried out only in case of the absence or obstruction of the fallopian tubes, endometriosis, polycystic, as a result of the removal of the ovaries or their disfunction, in the absence of the uterus or its disfunction, severe forms of male infertility, rare unexplained forms of infertility.

In vitro fertilization is not carried out when there are medical contraindications to gestation, in the occurrence of uterine malformations, intrauterine adhesions or uterine septum, in the severe cases of uterus myoma or uterine fibroids, incurable cervical patency, in the occurrence of the genetic disease in the family or birth defect, during the aggravation periods of the inflammatory or chronic diseases.

Injection of the sperm into the egg using micromanipulation techniques. ICSI is carried out with a low number of spermatozoa in the sperm, high levels of abnormal sperm morphology, sperm dysfunction, as well as sperm-egg interaction disorder.

ТЕSА – aspiration/extraction from the testis (TESA, TESE) with histopathology by the means of biopsy

TESA is the newest of the aspiration techniques sperm retrieval. In this procedure, a small amount of testis tissue is taken by biopsy under local anesthesia. It is a breakthrough in that it demonstrates that sperm do not have to “mature” and pass through the epididymys in order to fertilize an egg. Because of their immaturity, however, testicular sperm need ICSI.
It is performed due to the absence of spermatozoa in the semen.

The eggs are obtained from a healthy female donor, fertilized by the husband’s sperm and then transferred into the uterus of the Intended mother. The procedure is carried out in the absence or functional disorders of ovaries of the prospective mother when the matured eggs are morphologically and fuctionally defective.

Transfer of the donor embryos into the uterus of infertile female. The procedure is carried out in case of absence of ovaries or eggs dysfunction, as well as a low number of spermatazoa in the husband`s sperm, a large amount of morphologically abnormal sperm, sperm-egg interaction disorder, in case of unfavourable medical and genetic prognosis for the offspring of the couple.

Sperm Bank – involves freezing and storing of the donor sperm, which can also be used for insemination or performing the IVF for women, as well as in case of complete male infertility. Sperm freezing is carried out in the liquid nitrogen, using specialized equipment and programs. Sperm can be stored for several years in the frozen state.

Fertilization involves eggs and sperm obtained from the Intended parents. Developed embryos are transferred to the uterus of a “surrogate mother”, who has voluntarily agreed to carry the child for them. Used in the absence or malfunction of the uterus, as well as in case of diseases and disorders of different body systems with contraindications for pregnancy.

Diagnosis of genetic disorders can be carried out before the embryo is transferred to the uterus. Micromanipulation technique or a laser, a single cell biopsy (blastomere or embryo trophoblast) of the embryo are used to diagnose its genetic characteristics.

The egg is surrounded by an extracellular membrane called the transparent zone or zona pellucida. In order to insert (implant) the embryo under the uterine lining, it must break free from the zone pellucida. It is believed that sometimes the embryo is not released, and the implantation does not occur; therefore, an assisted release or assisted hatching is carried out.

Due to the pathological conditions (premature menopause, ovaries damaged during chemotherapy and radiological treatment) ovaries do not produce follicle and mature egg.

In such cases, the eggs are obtained from a healthy donor, then donor eggs are fertilized with the husband’s or the donor’s sperm and the embryos are transferred into the uterus of the infertile woman. This process is called the donation of oocytes (eggs).
This method can be used in case the patient’s ovaries were removed, or when there is a high risk of transmitting genetic diseases to a child.

Health indications for using a donated eggs are divided into absolute and relative.

The absolute indications include the following conditions:

Who can become an egg donor?

Egg donors can be divided into three groups:

Accidental egg donors – patients involved in the standard IVF program who, after stimulating superovulation produce an “excess” of the eggs and who have given voluntary consent for these eggs to be used in IVF, and created embryos transferred to the recipients. Due to the development of cryopreservation of embryos, this group of patients has significantly decreased, as in case of unsuccessful IVF, the patient has a chance to conceive by transferring thawed embryos.

Professional egg donors – are healthy women up to 30 years old with normal reproductive function, ready to undergo the stimulation of superovulation and transvaginal puncture for a certain monetary compensation.